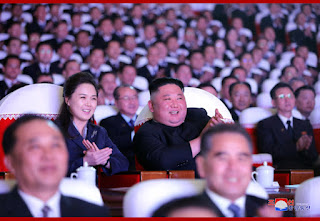 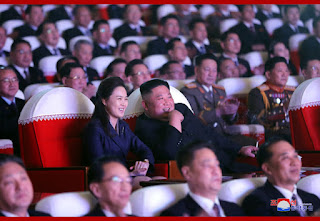 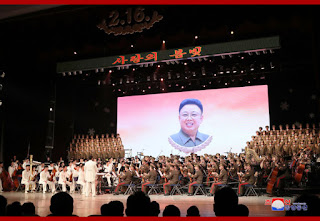 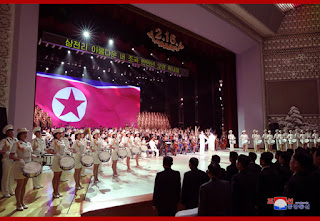 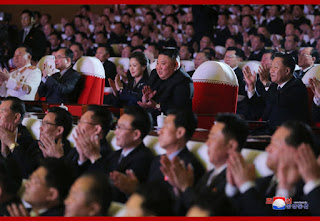 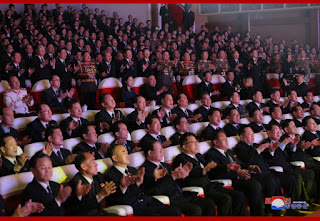 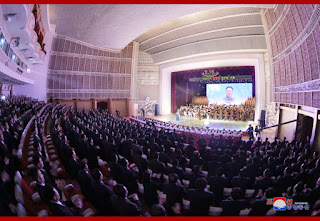 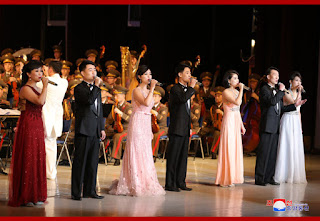 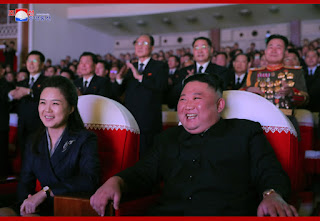 Pyongyang, February 17 (KCNA) — Kim Jong Un, general secretary of the Workers’ Party of Korea (WPK) and president of the State Affairs of the Democratic People’s Republic of Korea, watched the performance for celebrating the Day of the Shining Star, the birth anniversary of Chairman Kim Jong Il, with members of the Party central leadership organ on Tuesday.

The Mansudae Art Theatre, the venue of the performance, was wrapped in great enthusiasm and excitement of the audience who were to enjoy the grand performance with the General Secretary in the time-honored theatre closely associated with the leadership of Kim Jong Il who opened up the flowering period of the Juche-oriented art.

As the General Secretary came to the auditorium of the theatre together with his wife Ri Sol Ju amid the welcome music, all the participants burst into thunderous cheers of “Hurrah!”, extending the greatest respect to the General Secretary, who is ushering in a new period of development of building our own-style socialism with noble responsibility for the Party, revolution, country and people.

Officials of the Central Committee of the WPK also watched the performance.

The performance was given by artistes of the band of the State Affairs Commission, the State Merited Chorus and major art troupes.

The performance that started with the Patriotic Song was divided into two parts.

Put on the stage of the first part were hymns for Kim Jong Il including mixed duet and male chorus “Shine, Jong Il Peak.”

The performers sang highly of the undying feats performed by the peerless patriot who was born as the Shining Star of Mt. Paektu with the spring warmth of February and recorded the noble history of making total dedication to the people in the long course covered by the Juche revolution.

Listening to the hymns conjuring deep memories, the audience looked back on the noble revolutionary career of Kim Jong Il who laid a firm foundation for building a powerful socialist country with his self-sacrificing dedication beyond imagination with a pledge to glorify the country of the great sun all over the world.

Whenever the beaming image of Kim Jong Il was shown on the background screen of the stage, the audience showed their immense self-confidence and pride of having made revolution led by the great man born of heaven, the great leader, with loud applause.

The first part ended with mixed chorus and male chorus “Snowstorm over Jong Il Peak” and female trio and male pangchang “A Dear Name”. It reminded the audience of how worthwhile honor of life they had when they covered the long journey of the revolution by following Kim Jong Il.

Put on the stage of the second part that started with song “There Are People by the Marshal” were hymns our people heartily sing in reverence for the respected Comrade Kim Jong Un who is confidently leading our own-style socialism to a new victory in the noble idea of believing in people as in Heaven, single-minded unity and self-reliance associated with the lifetime intention of Kim Jong Il.

The theatre was overflowing with emotion amid a series of songs showing the faith of the people to uphold and follow the General Secretary as the sun of their destiny as he is opening up the new era of our state-first principle and cultivating the great flower garden on the people-first principle while making energetic efforts for the prosperity of our socialist state, the greatest patriotic legacy bequeathed by Kim Jong Il.

The performance demonstrated the iron will of our people to surely win a great victory in the all-people grand march for implementing the decisions made at the 8th Congress of the Party while fluttering high the flag of the Juche-oriented Party, rallied closer around the General Secretary. It ended with mixed chorus and male chorus “Fly High, Our Party Flag” and female solo and mixed chorus “People Are of a Single Mind”.

The paean “A Dear Name”, a beloved song of our people to eulogize their great glory and happiness of upholding Kim Jong Il, resounded throughout the theatre again as encored by the General Secretary, revving up the atmosphere.

The General Secretary expressed great satisfaction over the successful performance which made excellent artistic depiction of the strong longings of the people for Kim Jong Il and their firm pledge to remain true to the guidance of the Party Central Committee.

A floral basket in the name of the WPK Central Committee was conveyed to the performers amid the enthusiastic applause.

The members of the Party central leadership organ hardened their pledge of loyalty to dedicate their all to and devotedly strive for successfully implementing the grandiose fighting programme of our Party, while looking up to the General Secretary repeatedly bestowing great loving care and warmly encouraging them so that they could deeply cherish their heavy yet honorable mission and responsibility before the Party, revolution and people and fulfill their duty and role as the organizer and standard-bearer in the struggle for implementing the decisions made at the Party congress. -0-