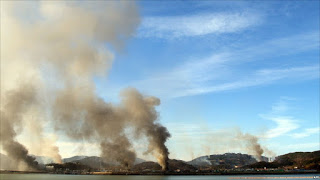 The mainstream media and so-called specialist websites such as the CIA sponsored NKNews paint a false picture of what happened alleging that it was a ‘north Korean attack on south Korea ‘ . However the reverse is true , it was merely a self-defensive action and just retaliatory action by People’s Korea against south Korean puppet aggression .

The incident occurred within the region of the West Sea of Korea . The is an extremely tense area where many armed clashes and exchanges of fire have occurred largely because the south Korean puppets have tried to impose the phony ‘northern limit line ‘ which is not recognised by the DPRK and is invalid in international law .Yongphyong Island is actually within the territory of the DPRK.

What happened on the 23rd of November 2010 was that  the south Korean puppet armed forces were conducting the aggressive and provocative Hoguk war exercises despite denunciations by the DPRK . At 1300 hours Korean time  on the 23rd of November the south Korean side began shelling the DPRK causing damage to farmers houses (luckily the farmers were out at work so no casualties ) . The Korean People’s Army front command repeatedly contacted the south Korean side demanding they stop shelling the DPRK , also warning them that if they did not stop then retaliatory measures would be taken . South Korea ignored the warnings .

Enough was enough . The DPRK took decisive retaliatory action and fired back at south Korean military bases on Yongphyong Island .The south Korean puppets suffered some fatalities and went crying to the Americans like a scolded child but in the end the US did nothing as they did not want to provoke the DPRK .